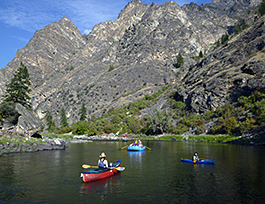 And the Middle Fork Salmon is so much better because of it.
Far and Away’s Steve Lentz remembers traveling the Middle Fork of the Salmon River with his father when toilet paper littered every campsite, rocks were blackened with soot and scattered garbage had to be shoveled into piles before tents could be erected.
Idaho’s then-Senator Frank Church introduced legislation to set aside certain rivers for protection from development, including more dams that could ultimately harm or destroy the fragile river ecosystems. The Wild & Scenic Rivers Act (WSRA) was passed unanimously in the Senate and with only seven no votes in the House of Representatives.
When the WSRA was signed on Oct. 2, 1968 it created the National Wild & Scenic Rivers System, which originally designated eight rivers, including the Middle Fork Salmon. Over the next 50 years, another 200 rivers have been protected, and the wilderness area through which the Middle Fork flows is now called the Frank Church River of No Return Wilderness Area in his honor.
WSRA protected rivers that “possess outstandingly remarkable scenic, recreational, geologic, fish and wildlife, historic, culture or similar values, in their free-flowing condition, and that they and their immediate environments shall be protected for the benefit and enjoyment of present and future generations.”
One hundred miles of the Middle Fork of the Salmon River is designated as Wild, which is defined as “free of impoundments and generally inaccessible except by trail, with watersheds or shorelines essentially primitive, and waters unpolluted. The river also includes a one-mile section as Scenic, which is more developed than Wild river sections and less developed than Recreational river sections.
Today, the Act protects 12,734 miles of 208 rivers in 40 states and Puerto Rico, representing about one-quarter of one percent of the rivers in the U.S. Dams, on the other hand, have modified some 600,000 miles of rivers, or about 17 percent of rivers in the U.S.
Here on the Middle Fork Salmon, Far and Away is famous for it well-equipped sweep boats carrying “Far and Away the Most Stuff on the River.” If we carry it in, we carry it out. And that includes fine food and wine, cloth table cloths, massage tables, yoga mats, private tents, solar-powered showers and more.

RESERVE AHEAD FOR 2018 AND BEYOND